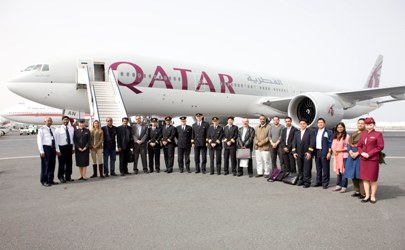 Doha, QATAR – Qatar Airways has reached another milestone in its short history with the delivery of its 25th Boeing 777 aircraft.

The aircraft, a Boeing 777-300 Extended Range (ER) version, arrived in the airline’s hub city of Doha following the overnight delivery flight from Boeing’s manufacturing factory in the US west coast city of Seattle.

The latest acquisition is the 15th 777-ER in Qatar Airways’ Boeing fleet which also includes eight B777-200 Long Range versions and two 777 freighters. Qatar Airways, which began taking deliveries of the Boeing 777s in November 2007, now operates a mixed fleet of 97 Boeing, Airbus and Bombardier aircraft.

The Boeing 777-300ERs are used on services across Europe, Middle East, South Asia, Far East and North America. The Boeing 777 is one the world's most technologically advanced aircraft, and will help Qatar Airways to further expand its business and support projected growth in long-haul markets.

Qatar Airways Chief Executive Officer Akbar Al Baker commented: “The Boeing 777 forms the backbone of our long-haul and ultra-long-haul fleet. The latest delivery further cements our strategy in operating one of the youngest fleets in the sky with an exciting and diverse global route network covering all six continents.”

The Boeing 777 offers a combination of economics and passenger comfort that will continue to give Qatar Airways a competitive advantage in the marketplace. The Boeing 777-300ER is significantly lighter than similar aircraft types, greatly reducing its fuel requirement. It produces 22 percent less carbon dioxide per seat and costs 20 percent less to operate per seat. The Boeing 777 is distinguished by its fuel efficiency, spacious cabin interior, range capability and service reliability.

Qatar Airways’ two-class Boeing 777-200ER features 42 Business Class seats in a 2–2–2 configuration with each offering a generous seat pitch of 78-inches – or 6.5ft of leg room. Each seat converts into 180 degree horizontal flat beds. The aircraft also features 293 Economy seats in a 3–3–3 layout offering up to 34-inch pitch. All seats provide personal touch screen seat back TV screens offering more than 900 interactive audio and video entertainment options, regardless of which class passengers are travelling in.

The new aircraft deliveries, averaging more than one per month, are part of Qatar Airways’ long-term growth strategy to expand and modernise its fleet with newer and more fuel-efficient aircraft. In the next three years, the airline will launch flights to over 20 new destinations.

For Qatar Airways, 2011 is an outstanding year of milestones in network growth and fleet expansion just 14 years after starting operations. On April 6, the airline will launch its 100th destination to the Syrian city of Aleppo.

In the summer, Qatar Airways will reach yet another key milestone when its fleet strength will reach 100 aircraft.

Qatar Airways’ fleet is one of the youngest in the skies, with an average age of less than 4 years, and this figure will fall further each month as it takes delivery of almost 200 aircraft, worth over $40 billion over the next few years.

Qatar Airways is in the middle of an expansion drive that includes opening seven new routes over a six-month period. Apart from the 100th destination Aleppo, six further routes are scheduled to be launched over the coming months, taking the airline’s passenger network to 106 destinations. The additions of Shiraz (June 5), Venice (June 15), Montreal (June 29), Kolkata (July 27), Sofia (September 14) and Oslo (October 5) will continue Qatar Airways’ successful business model of targeting new routes in both popular and underserved markets.

Four new routes have been launched since January 2011, including Budapest, Bucharest, Brussels and Stuttgart. 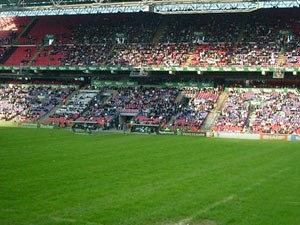 The state-of-the-art stadium hosts soccer matches both nationally as well as internationally. The stadium has a capacity of approximately 50,000 spectators. The stadium is built in such a way that it can be used in any time of the year due to its automated roof, technical heating and ventilation systems. Apart from sports, Parken Stadium also holds concerts featuring famous singers such a Michael ...