Barcelona, SPAIN – Qatar Airways, one of the world’s fastest-growing airlines, achieved yet another milestone yesterday as it launched daily flights between Doha and Barcelona – its 90th destination.

With the touchdown of flight QR067 in Barcelona, where the aircraft was welcomed by a dramatic water salute and met by senior airport officials and local dignitaries, the airline reinforced its position as the only Gulf carrier flying to Spain.

Barcelona is Qatar Airways’ second city served in Spain, after Madrid, and is expected to receive great response from leisure and business travellers alike. The new route underscores a growing commitment by the airline to the Spanish market following earlier capacity increases to the country’s capital city of Madrid last year.

As Spain’s second largest city, Barcelona is a popular tourist centre on the Mediterranean coastline. It is home to one of Europe’s main ports and has a thriving economic base due largely to its importance in finance, commerce, media, entertainment, arts and international trade. According to official tourism data, 52 million tourists visit Spain every year, making it one of the most visited countries in the world. 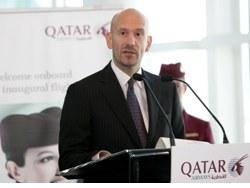 Qatar Airways Chief Executive Officer Akbar Al Baker said that as a result of Spain’s escalating demand for air travel combined with the great popularity of the country among travellers from the Middle East and Asia, the Doha-based airline has steadily built up its presence in Spain.

“The launch of flights to Barcelona – our 90th destination in our ever-growing network is truly a milestone for Qatar Airways,” he said.

“Barcelona is a vibrant city with incredible appeal among leisure and business travellers, and we are confident that our new daily flights will be equally successful as our daily services to Madrid.”

Added Al Baker: “With 14 flights a week now operating to Spain, this reflects the high demand we have been experiencing in and out of the region, helped by increased economic ties between the Middle East and the Iberian Peninsula.”

In time for the summer holiday period, Qatar Airways’ newest destination is set to be a hot spot for everyone looking for a great place to spend their vacation.

Barcelona is the 2,000 year old capital of the Catalunyan region, an excellent year-round destination, offering art, unique architecture, nightlife, sophisticated shopping and gastronomical delights which cater to travellers of all ages and budgets.

The city has a population of over three million people. Due to its quaint Old Town centre and plenty of sightseeing attractions in close proximity of each other, visitors can easily explore Barcelona on foot.

Barcelona is also an ideal gateway city to further discover the magic of Spain such as the country’s southern region of Andalucia. Rich in Moorish history and architecture including the mythical Alhambra Palace and being the birthplace of the colourful Flamenco dance, the tourism Spain has to offer is one of a kind and determined to attract many travellers from the Middle East, South Asia and Asia-Pacific.

The city is the fifth new destination launched by Qatar Airways so far during 2010. Over the past six months, the carrier has introduced services to Bengaluru (Bangalore), Copenhagen, Ankara and Tokyo. 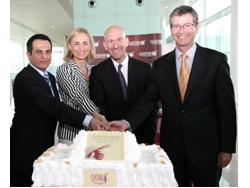 Beginning June 24, Qatar Airways will serve the Brazilian city of Sao Paulo and the Argentine capital Buenos Aires with daily scheduled flights direct from Doha. The addition of South America will ensure Qatar Airways becomes a truly global airline – a remarkable feat in just 13 years since its launch.

Passengers flying First Class or Business Class through Doha onto connecting cities with Qatar Airways will be able to transit through the airline’s exclusive Premium Terminal, where they can unwind and relax enjoying creature comforts of the facilities, including fine dining, spa treatments and duty free shopping.

On the Doha – Barcelona route, Qatar Airways operates an Airbus A319 in a two-class configuration of 8 seats in Business Class and 102 in Economy.

Florence Nightingale was a British social reformer who is believed to be the founder of modern nursing. She was recognized for her talents in tending to wounded soldiers during the Crimean War from 1853-56, fought between Russia and the allied powers of Britain, France and Turkey.   Florence Nightingale has been a celebrity for over 150 years. Her face has appeared on bank notes, paper ba...