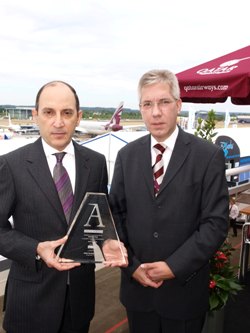 The Doha-based carrier’s well documented move into the research of alternative jet fuel as part of an overall mission to secure a cleaner and environmentally friendly future, helped win it the Environment accolade at the annual Airline Strategy Awards held in London.

The airline earned recognition among an illustrious judging panel made up of chief executives, aviation consultants, leading analysts and academics drawn from across the industry.

Now in their ninth year, the awards which are run by the leading monthly aviation magazine Airline Business, have established themselves as the sector’s benchmark recognising boardroom leadership and strategic vision.

The airline was acknowledged for its leadership in pioneering the use of alternative jet fuel having operated the world’s first commercial passenger flight powered by a fuel made from natural gas. The flight from London Gatwick to Doha in October 2009 made headlines around the world.

Otherwise known as gas-to-liquids (GTL) fuel, the milestone flight was also seen as the first step in helping make the alternative synthetic fuel available to all airlines in the future.

Over the past two years, Qatar Airways has been instrumental in driving a number of environmentally-friendly projects designed to find ways to maximise fuel saving efficiency and explore the use of cleaner jet fuels.

Qatar Airways Chief Executive Officer Akbar Al Baker said: “It is a great honour for the airline to be recognised with this prestigious award and it only demonstrates the commitment that we at Qatar Airways have towards a cleaner and environmentally-friendly crowded skies.”

“At Qatar Airways, we don’t just talk, but take positive action to produce results and these measures we have and will be adopting, will only help airlines around the world to fly the global skies with a cleaner and friendly environment at the forefront of their growth strategies.”

With an ultimate aim to use a blend of GTL and biomass-to-liquid (BTL) jet fuel, this would help the airline be independent of conventional aviation jet fuel in the future.

“In a remarkably short time, Qatar Airways has gone from a relative laggard on the environment front to one blazing a trail for others to follow,” said Mark Pilling, Editor of Airline Business.

“With increasing pressure to display its environmental credentials and emissions trading schemes, Qatar Airways’ leadership knew the time had come to significantly boost its activities on the environment front.”

For an introduction to Balinese art and history, the museum should be part of your itinerary. All artwork is displayed and organised according to international standards. It was founded in 1982 by a patron of the arts, Suteja Neka. Jalan Raya Campuhan (about 10 min. north of central Ubud, near Ananda Cottages) Phone: 361/976206 Museum timings: Monday-Saturday: 9:00 am.- 5:00 pm Sun... 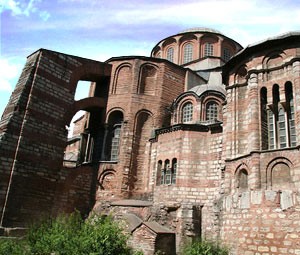 Chora Church dates back to the early fifth century AD and is one of the finest examples of Byzantine architecture.  It was built just outside of Constantinople's original walls, but was brought inside the city's defenses when Emperor Theodosius II built a new wall.  The church was rebuilt between 1077 and 1081, and again renovated after an earthquake in the twelfth century.  Most of...

One of the most famous artists in history, Van Gogh's work is displayed at the Van Gogh Museum. Located between the Rijksmuseum and the Stedelijk Museum, the museum entrance is at the Paulus, Potterstraat 7. Tram No 2 and 5 from the Central Station will take you to the museum. The museum is disabled friendly. Opening hours Museum: daily 10am - 6pm/ Friday 10am- 10pm Closed 1 Janua...