Following the global unveiling of the airline’s 787 Dreamliner seats in Berlin last month, they will again come under the spotlight at Arabian Travel Market (ATM), a four-day event which attracts the crème de la crème of the travel industry from the Gulf, across the Middle East and around the world.

On display at Qatar Airways’ new-look exhibition stand, which also makes a first time presence in the Middle East, are the airline’s Business and Economy Class 787 seats. ATM runs from April 30 – May 3 at the Dubai Convention and Exhibition Centre.

The airline is the Middle East launch customer of the 787 with the first of 60 aircraft on order due for delivery this summer. The seat design is revolutionary and the proprietary to Qatar Airways, which worked closely with the manufacturer to have custom-made seats fitted on the aircraft – with space and comfort the biggest features of both cabins.

Qatar Airways Chief Executive Officer Al Baker said the airline’s presence at next week’s ATM travel fair will be the most exciting ever for the region’s travel trade as it will be the first time the carrier will debut  both a new exhibition stand and new seats.

The airline boss will also come under the spotlight on the first day of the show in a one-to-one live forum called ‘The Big Talk: Head to Head with CEO of Qatar Airways.’

The one-hour session, facing questions from aviation consultant and media commentator John Strickland, promises to be a lively discussion in Al Baker’s true candid and unflinching style, as he is known for speaking up on all industry issues. The session takes place on the afternoon of April 30 in the Seminar Theatre of Hall Four at ATM.

Al Baker said: “ATM is the premier travel show in the Middle East where suppliers from across the travel industry showcase their newest offerings. For Qatar Airways, combined with a wave of new destinations we are promoting this year, and showcasing our new 787 seats and brand new exhibition stand for the first time in this region, we look forward to a busy week ahead meeting travel industry partners and corporate customers.

“The impending arrival of the Boeing 787 in Qatar Airways’ colours is the highlight of 2012 for us, being the first new aircraft type inducted into the airline’s fleet since our maiden Boeing 777 arrived in Doha in 2007.”

The seat configuration onboard Qatar Airways’ Boeing 787 makes it an industry leader with innovative design a hallmark of the interiors. Business Class is configured 1–2–1 featuring seats that convert into fully flat horizontal beds, while Economy Class has a 3–3–3 cabin layout.

In February, the carrier launched services to the European capital cities of Baku in Azerbaijan, Tbilisi in Georgia and, last month began flights to Kigali, the capital of Rwanda in East Africa. 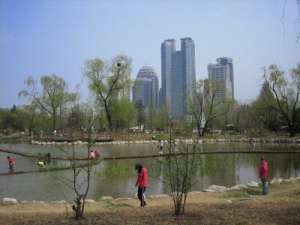 Once the site of the Korean Air Force Academy, it symbolizes the Air Force. The word Boramae means Hawk. The park is spread out on 360,000 square meters and has sports facilities as well as a small zoo. It also has a huge pond that spreads out to 9000 square meters and has well planned walking paths. The pond is surrounded by willow trees and benches and is very popular, especially during summer a...

The London Dungeon brings together an amazing cast of theatrical actors, special effects, stages, scenes and rides in a truly unique and exciting walkthrough experience that you see, hear, touch, smell and feel. It’s hilarious fun and it’s sometimes a bit scary.    It's a 90 minute journey through 1000 years of London's murky past. You and your companions walk through the Dungeon, mo...