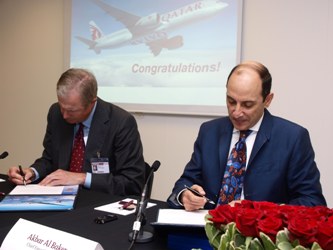 The Doha-based airline also revealed a revised delivery schedule of its Boeing 787 Dreamliners, with the first to arrive from the fourth quarter of 2011 to help meet early aircraft requirements.

With today’s announcement, Qatar Airways has firm orders for 10 Boeing 777s and a further three on option with the US aircraft manufacturer.

“Air travel demand is continuing to rise in the Middle East and it is becoming clear that international demand is returning as the global economy shows signs of recovery,” said Al Baker.

“We continue to invest in new aircraft and new routes and will be well positioned for the upturn in air travel with a fleet fully optimised for economic and environmentally friendly operations.”

Added Al Baker: “The Boeing 777 has become the cornerstone of our fleet. It is a tool for profitability, but also a platform for delivering the highest customer satisfaction. Its service reliability and cabin architecture, coupled with our innovative interiors and world-class in-flight service have made the 777 the airplane of choice for our passengers.

“The additional two Boeing 777-200 LRs will help us open up new ultra long-haul markets as we expand and identify new opportunities further.”

Qatar Airways’ three pairs of Boeing 777-200 LRs currently operate non-stop between Doha and Houston, Melbourne and Sao Paulo, the latter route continuing onto Buenos Aires. It is the longest range commercial aircraft in the world, capable of connecting virtually any key city in the world non-stop from the airline’s hub in Doha.

Qatar Airways began taking delivery of its Boeing 777 passenger aircraft in November 2007. Its first Boeing 777 freighter was delivered two months ago, followed soon after by a second. 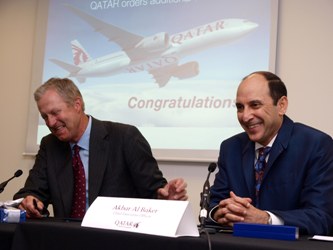 A Qatar Airways Boeing 777-300ER is on static display at the Farnborough Air Show this week, representing a symbol of the ultra-modern fleet of Boeing airplanes operated by the airline.

“In its first few months of operation, the 777 Freighter is performing exceptionally well and as expected, meeting operating economic targets and is well on its way to help us grow the freight transport part of our business,” said Al Baker.

Qatar Airways today also announced that it had reached a formal agreement to advance its Boeing 787 deliveries to support its network growth and fleet replacement requirements by the end of next year.

Qatar Airways’ first 787 is now scheduled to enter service during the fourth quarter of 2011 and the airline expects to have five aircraft in service by the end of the first quarter of 2012.  These 787 aircraft will introduce new and significant cabin product enhancements to the Qatar Airways fleet.

The airline is also negotiating further delivery accelerations of its thirty firm 787s with Boeing in order to replace its early Airbus A330s, which will be less than nine years old when the 787 enters service with the carrier.

The Boeing 787s will form the core of Qatar Airways’ regional- and medium-haul fleet. Its optimum size and outstanding fuel efficiency and economics will underpin the airline’s competitiveness as it prepares to move to a new hub – the New Doha International Airport – which is under construction and expected to be completed by next year.

With the addition of new routes, Qatar Airways will operate flights to more than 100 destinations by next year. 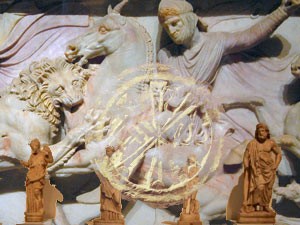 The archaeological Museum, begun only two years after the university itself, has a collection of objects from the Middle East region ranging from the Stone Age to Islamic times. The cavernous interior of Post hall, which is decorated with towers and crenellations, makes a suitable home for the museum’s classic sculpture, Islamic pottery, Iron Age figurines and Stone Age tools.  Timings: 10 am – ...