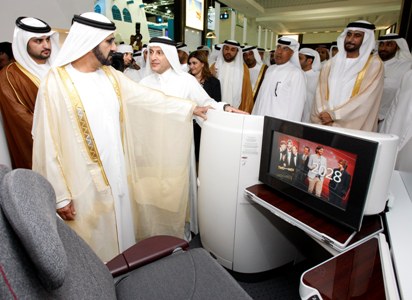 The Four day exhibition kicked off with an official inauguration by His Highness Sheikh Mohammed bin Rashid Al Maktoum, Vice President and Prime Minister of UAE and Ruler of Dubai.

Qatar Airways is the Middle East launch customer of the 787 Dreamliner with the first of 60 of the aircraft-type on order due to be delivered to the Doha-based airline this summer.

ATM, which ends tomorrow (May 3), is a four-day event which attracts the crème de la crème of the travel industry from the Gulf, across the Middle East and around the world. Visitors from around the world visited Qatar Airways’ stand to sample the airline’s renowned hospitality and its latest seat product offerings.

Qatar Airways is gearing up to launch a range of new destinations, including Zagreb (Croatia) next week, on May 9; Perth, the airline's second Australian route from July 3; Kilimanjaro on July 25 as well as Mombasa on August 15, Erbil and Baghdad in May and June respectively, and Myanmar in October.

Among other new routes due to join the airline's network with dates yet to be announced are Belgrade (Serbia), Helsinki (Finland), and Zanzibar (Tanzania).

Qatar Airways is one of the world’s fastest growing airlines, operating a modern fleet of 109 aircraft to 113 diverse business and leisure destinations across Europe, Middle East, Africa, Asia Pacific, North America and South America from its Doha hub.

Kilmainham Gaol is a former prison turned museum that played an important part in Irish history.  It opened in 1796.  The leadership of failed Irish rebellions in 1798, 1803, 1848, 1867, and 1916 were held, and oftentimes executed here.  Consequently, the prison was seen as an instrument of British colonial control and was closed after independence in 1924.  In the 1950s, plans...

Located at the very edge of Paris city proper, just inside the Boulevard Periphérique, the Parc de la Villette is one of the city’s newest.  It was built between 1984 and 1987 as part of an urban redevelopment project on the site of Paris’ old slaughterhouses and meat market.  The park is notable for its unique architecture and is one of the best places in the city for kids.   There are ...