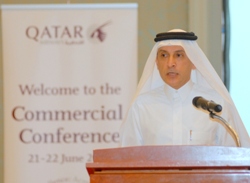 The Doha-based airline will phase in the route expansion over a four-month period with daily flights to Phuket – after Bangkok, its second destination in Thailand – kicking off the growth drive on October 11. The new flights will operate via Kuala Lumpur.

Three weeks later, beginning November 1, Qatar Airways adds the Vietnamese capital Hanoi to its network with four flights a week via Bangkok. The new route will support existing services to Vietnam’s commercial centre and largest city of Ho Chi Minh City, where flights will also be stepped up from four-a-week to daily.

November 24 marks the launch of the carrier’s European expansion drive with thrice-weekly flights to the French Mediterranean city of Nice. Operating via Milan, the Nice operation will strengthen Qatar Airways’ services to France, where it already operates to the capital Paris.

The New Year sees Qatar Airways’ entry into eastern Europe with the launch of four flights a week to the Romanian capital of Bucharest, starting on January 17. The services continue on to Budapest, capital city of Hungary.

And with five flights a week from January 31, the Belgian capital of Brussels, home of the European Parliament, rounds off an impressive list of destinations for the airline, which has maintained its strategy of opening exciting new routes around the world since launching just 13 years ago.

Announcing the expansion at the airline’s annual commercial conference in the Qatari capital Doha today, Qatar Airways Chief Executive Officer Akbar Al Baker spoke of the carrier’s commitment to develop its route network far and wide from its hub.

“Qatar Airways’ track record to grow remains strong and solid,” he said. “The airline is well positioned globally, focusing on a long term strategy that is forward thinking and not one to look back on.


“Budapest, Bucharest, Brussels, Nice, Hanoi and Phuket represent markets underserved so these are excellent opportunities for us to tap into.

“We spend a lot of time diligently analysing new route opportunities and I am pleased to say that the routes being announced today will not only open up new markets, but also strengthen our network strategy over our Doha hub.”

Added Al Baker: “Today’s route network and fleet size will increase sharply over the next few years and all of us within Qatar Airways rise to the challenge by continuing to give our customers the Five Star level of service they fully deserve.”

This week – starting June 24 – Qatar Airways introduces South America into the airline’s family of routes with the launch of flights to the Brazilian city of Sao Paulo and Argentine capital Buenos Aires.

South America represents the latest destination for Qatar Airways this year. Over the past six months, the carrier has introduced flights to Bengaluru (Bangalore), Copenhagen, Ankara, Tokyo and Barcelona.

This is the best place for those looking for a bit of adventure and extreme water sports. The dive center specializes in scuba diving, snorkeling and other water sports. They have many training courses and short courses, and also rent equipment. With professionally trained staff and highly specialized medical teams and divers, you can be assured that you are in good hands. For those who are not in...

Kuwait is a very child friendly place, offering a wide range of activities and entertainment to keep them busy and safe at all times. You can take them to spend a whole day at the many theme parks like Entertainment City, to a more educational setting like the Scientific Centre or the Zoological Park. There are also plenty of water sports and fishing excursions for children. ...

Address: Jolfa Square, Jolfa neighborhood . This is another prominent church within Jolfa, a bit smaller, and treated with simplicity and elegance. A charming courtyard and the smaller Hacop Church are also contained within the premises of this impressive building.                    ...