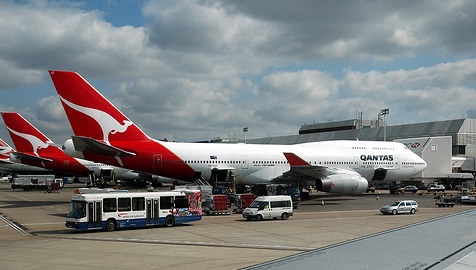 Australian airline Qantas Airways has grounded all its domestic and international flights in response to a worsening labor strike over pay and conditions, in a move that will see flights suspended until Sunday at the earliest.

Unions representing engineers, baggage handlers and pilots have engaged in protracted industrial action over the Australian flag carrier's plan to establish new Asia-based carriers to better tap rising regional demand and lower its cost base. Some of the unions are also making pay claims that Qantas says are excessive.

Thousands of passengers world-wide have been affected, with more than 13,000 booked to fly into Australia over the next 24 hours. Some 108 aircraft were grounded in 22 airports around the world.

Refunds have been offered, and Qantas has promised to pay for food and accommodation to those in transit.

Rival airlines, including Virgin Australia, seized the opportunity to say they would boost capacity.

Have you been affected? Write to us (mail@irhal.com) , or comment on this story below.

Built in 1896 from lime-covered coral along Dubai Creek, this was the home of Sheikh Saeed Al Maktoum.  It was actually built by his father so he could observe the shipping lane from his balcony.  The sheikh lived here during his rule, from 1921 to 1958.  The whole complex has been completely restored and renovated.  It is a national monument and a museum, with photographs, jewelry, artillery, and...

Address: Gamal Abdul Nasser Street, western corner of al-Tahrir Square Phone:  276635 Timings: 3pm to 5pm Housed inside a building that has witnessed several institutions over the years, including being a prison and later a guesthouse, the Military Museum flaunts centuries of Yemeni warfare – from the stone tools of the earliest civilizations up to late modernity. The exhibits are categ...