On October 24, 2010, Lufthansa reintroduced its acclaimed First Class on its daily Bahrain-Frankfurt service. The deployment of the 221-seat Airbus comes with a marked increase of the capacity on the route. Lufthansa’s A340-300 features a classic 3-class cabin configuration with 8 seats in First class, 48 seats in Business class and 165 seats in Economy class.

In time for the winter time season, Lufthansa further enhances its flight service between Bahrain and its Frankfurt hub. A little over a year after increasing flight frequencies on the route to a daily service – from formerly four flights a week – Lufthansa concludes its investment plan for Bahrain with the reintroduction of its acclaimed First Class service.

“With the deployment of a wide body jet and an increase in capacity, Lufthansa underlines its commitment to Bahrain,” said Mr. Schaher Murad, Lufthansa’s Regional Manager for Bahrain and the eastern province of Saudi Arabia. “I am very happy to once again be able to offer our customers in Bahrain the full Lufthansa product range, including First Class.” Mr. Murad added: “Lufthansa has always been supported by the Bahrain Civil Aviation Authority and I would like to offer a special thanks here on behalf of Lufthansa and extend the same to our partner Kanoo Travel as well for their continued support.”


Four of the flights will be nonstop operations to Frankfurt, while three services will be operated with an intermediate stop in Dammam. Lufthansa customers enjoy the benefit of a late evening departure. All flights provide lean onward connections to Lufthansa German  destinations, to well over 100 European cities and some 200 destinations worldwide. In the USA and in Canada, Lufthansa serves some 21 destinations and countless more in cooperation with code share partners United Airlines and with affiliate JetBlue.

The increase in capacity on the Bahrain service goes in line with the general growth of Lufthansa in the Gulf Region. Over the course of the past few years Lufthansa has steadily increased its presence and today serves as many as 14 destinations across the Middle East. It has done so step by step and in line with market demand – a strategy of gradual, but steady expansion, which proved to be sustainable and profitable. Further planned network upgrades include an increase of frequencies on the service from Muscat via Abu Dhabi to Frankfurt which will go to daily at the end of October. 2009 saw a massive investment in Saudi Arabia, with an upgrade to 14 weekly flights – seven from Riyadh and seven from Jeddah. In April 2010 Lufthansa launched a new service between the Saudi capital and its Munich gateway in southern Germany.

Lufthansa serves nine destinations in the Gulf region, including Dubai, Abu Dhabi, Riyadh, Jeddah, Bahrain, Dammam, Doha, Kuwait and Muscat. Further destinations served in the Middle East include Beirut, Amman, Sana’a,,Tehran, and Erbil, Iraq. Flights from Munich to the Iraqi capital of Baghdad are currently in the planning for 2011.

Recently Lufthansa added its third Airbus A380 to its route network, with a total of 15 units scheduled for delivery through 2015. Lufthansa also has 20 Boeing 747-8 on order, which should be delivered between 2011 and 2015 and recently announced another large order of 48 new aircraft, which will  take the total order book to some 180 units for the group.

Choosing to fly with Lufthansa means being able to enjoy the many benefits of Miles & More. Founded by Lufthansa’s in 1993, Miles & More today counts more than 17 million members worldwide, making it Europe’s largest and most successful airline loyalty program. It was since joined by a number of Lufthansa’s European partner airlines, with affiliates SWISS, Austrian Airlines and Brussels Airlines being the most prominent ones.

This museum showcases a wide range of exhibits, including the props that were used in Hollywood films. Visitors are shown how the industry began with the silent film, and then moving onto the Hollywood Golden Era, to the technology used today and finally to the future of the industry. You also get a chance to see the whip used by Harrison Ford in Indiana Jones, as well as Marilyn Monroe's autopsy....

The Royal Botanical Gardens at Kew date back to the seventeenth century.  They are the grounds of Kew Palace, and were nationalized in 1840.  The gardens cover more than 300 acres.  In addition, there are several glasshouses filled with exotic fauna.  In 2003 they were named a UNESCO World Heritage Site.  The gardens are huge, so plan out what you want to see ahead of t... 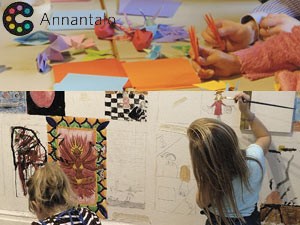 Helsinki’s Cultural Office runs this special program for children to keep them entertained during their holidays. Annantalo is an art center that is filled with children learning basic art techniques, attending small exhibitions, workshops and dance performances.                     ...