March 14- The aviation industry body IATA cut its net loss forecast for Middle East carriers to $400 million (Dh1.46bn) a substantial reduction from its initial forecast in 2009 of a $1.5 billion loss.  Giovanni Bisignani said demand is causing recovery in the region but low yields on hub traffic will limit profitability.

Bisignani, who is IATA’s director-general and chief executive, explained in a teleconference yesterday, that “We can clearly see from the numbers that the industry situation is improving.”   He said the improvement is driven by a recovery in demand as evidenced by year-end gains that have continued into the first months of 2010.  Globally, passenger demand has increased 6.4 percent and cargo growth increased 28.3 percent in 2009.  However, IATA said demand is still 2-3 percent lower than before the international economic crisis.  Bisignani projects Middle East carriers demand will grow 15.2 percent in 2010. 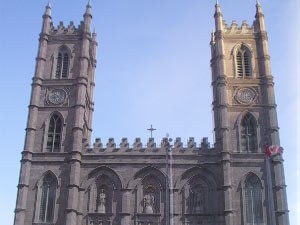 Notre Dame Basilica is one of Montreal’s most beautiful buildings.  The parish housed in the church dates back to 1657, but by the start of the nineteenth century had outgrown its building.  Notre Dame Basilica was built between 1824 and 1829, and was consecrated in 1828.  It was designed by Irish-American architect James O’Donnell.  A Protestant, O’Donnell converted to Catholi...

Rebels against communist Czechoslovakia praised Western rock musicians such as John Lennon and when he died in 1980 this wall was painted in his honor; repainted again and again every time the secret police white-washed it. Today it stands proudly though a bit graffiti splattered. Address: Velkoprevorske namestri                    ...