June 1 - Dubai’s low-cost carrier, Flydubai, is celebrating its first anniversary today when its inaugural flight was launched. Despite concerns that the airline would not survive in an already suffering aviation industry, the airline has managed to capture more passengers than a conventional airline.
Starting with Beirut, Flydubai has added 15 more routes during the year. Recently, the airline started services to Colombo and will soon start flights to Lucknow, India. "Two years ago, there was nothing. The airline was a piece of paper," Ghaith Al Ghaith, chief executive of Flydubai, said yesterday. "Now we have an airline with 16 destinations and, on June 23, there will be 21 destinations. We're almost maturing."
With 50 Boeing 737-800 aircraft on order, Flydubai will take delivery of its ninth aircraft this month. The Male Fish Market is one of the most fascinating tourist destinations in Male. It is located along the beach front, to the west of the Republic Square. This area is the centre of all trading activity and is full of hustle and bustle throughout the day. The waterfront and the connecting streets in the area are swarming with shops stocked with a variety of local goods. You will see some dhonis ar... 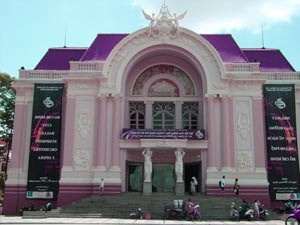 Also known as the Ho Chi Minh Municipal Theatre, the Opera House is a beautiful example of French Colonial architecture from 1897. The 3-story, 1,800-seat opera house stages a variety of concerts not limited to opera, including ballet, classical and pop music and traditional Vietnamese performances. The square outside is a great place to relax and people watch. Location: Intersection of Le L...