CEO of flydubai said there has been good passenger demand in their first month of operations.  Dubai’s first low cost carrier began operations in early June and Ghaith Al Ghaith maintains the airline is operationally sound.  He said “The response from the customer has been very good and the operation itself has been, touch wood, very silky."

Flydubai began its first flight services with Beirut on 1 June followed by Alexandria, Aleppo, Amman, and Damascus.  They are currently in talks with Indian airline and aviation authorities regarding services to Chandigarh.  They will start flight services to the Indian cities of Lucknow and Coimbatore.  The Indian Airforce controls the hub in Chandigarh and does not allow civilian flights arrivals after 10pm.  Flydubai dismisses reports in the Indian media that talks are stalled, maintain they are working closely with Indian authorities and there will be no problems 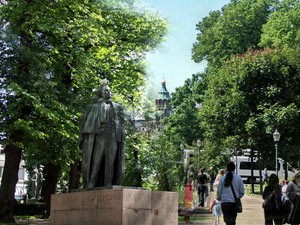 Esplanadi Park is located right in the center of Helsinki with lush green lawns that are crowded by both locals and tourists in the summer months. The park also offers a picnic place for people to get together and spend the day out with friends and family.                     ...

Opened in 2003, the Arts Gallery is a dominant NZ$ 47 building that has set standards for all others in the South Island. Eluding an aesthetic charm, the exterior complements the various high quality art displays inside that range from early European work to the contemporary video work done by New Zealanders. The gallery holds some of the best and larger than life paintings of New Zealand’s renown...