Etihad Airways first flight from Abu Dhabi to Chicago will depart on 2 September. Chicago is the third largest city in the United States.  There will initially be three flights a week but starting on 1 October, flights will be daily.  The new route is aimed at boosting Etihad’s North American presence.  The new flight service will operate on an Airbus A340-500 wide body aircraft with a capacity for 240 passengers.

Etihad Airways new destinations this year are Chicago, Melbourne, Hyderabad, Larnaca, Istanbul, and Athens.  A senior Etihad executive said “We see an average 14% airline capacity growth through to 2020.”  The airline expects revenues of about Dh11.4 billion ($3.1 billon) in 2009. 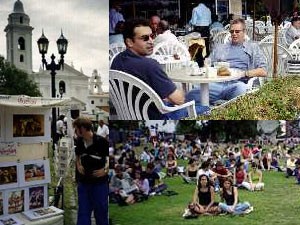 It is the unofficial ‘centre’ of the city as it holds the Plaza de Mayo, the main square in Buenos Aires. This barrio also has some beautiful French style buildings and is one of the most expensive areas to live. The square is surrounded by the key commercial and shopping areas in Buenos Aires and contains a beautiful park with fountains and statues. The Casa Rosada, the Presidential palace is on ...