Emirates to start flights to Basra

DUBAI, U.A.E  - Emirates will launch services to Basra, Iraq from 2nd February next year.
Basra will be Emirates'110th international destination and the sixth to launch in the 2010-2011 financial year. The service will operate four times a week each Monday, Wednesday, Thursday and Saturday, subject to Government approval. The flight will be operated by an Airbus A330, in a three class configuration, First Class, Business Class and Economy Class on Wednesday, Thursday and Saturday and in a two class configuration, Business Class and Economy Class, on Mondays.

"Basra is a significant market for Emirates. The city's recent growth has paved the way for numerous multinational companies and industries to invest in infrastructure and we have seen strong potential from a number of our markets," said His Highness Sheikh Ahmed bin Saeed Al-Maktoum, Chairman and Chief Executive, Emirates Airline & Group. "Since the 2009 oil field bid, traffic from the US and Europe into Basra has increased significantly and we are ready to capitalise on this growth."

"Our convenient flight times and good connections make Emirates an excellent choice for corporate travellers to Basra," added Sheikh Ahmed. "It has been a strong year of growth for Emirates and this announcement is further proof of our robust expansion plans."

Well positioned, close to the oil fields and the Gulf, Basra continues to attract investments from major corporations around the globe. Key inbound markets for Emirates will include, oil and petroleum companies from the US and Europe, as well as Iraqi diaspora.

Outbound traffic from Basra will be skewed towards local Iraqis. As the economy recovers and rebuilds, a large segment of the local population are expected to make use of this new service.

Local authorities in Basra have also started developing plans to attract inbound tourism with one of the city's most iconic hotels, the Sheraton, recently reopening for business.
Emirates expects to uplift around 10-12 tonnes of cargo per flight, using the belly hold capacity on the wide-bodied passenger aircraft.

As the city is re-established Emirates will be importing a range of commodities that will facilitate the city's redevelopment. Key imports will range from perishable foodstuffs and garments to electronics and oil well equipment - from all corners of the world.

EK 945 will depart Dubai at 13:45 hours and touch down at Basra International Airport at 14:45 hours the same day. At 16:15 hours, return flight EK 946 will depart Basra touching down in Dubai at 19:10 hours. The service connects seamlessly with key industry hubs in the US and Europe. 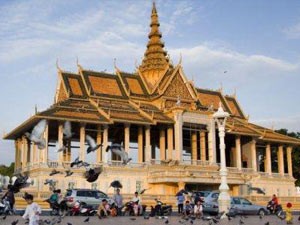 The Royal Palace features two splendid Pagodas, The Silver Pagoda and The Temple of Emerald Buddha. These are two of the very few buildings that are worth visiting in Phnom Penh. These places, build in early 19th century by French technology, are deemed of high respect by locales hence your clothing should be appropriate for entrance. No bare body parts allowed and photography is prohibited inside...

Children and adults will love the diversity of fauna housed here. Over 1500 kinds of animals from the globe over are housed here. These include animals specific to the region such as Qatar’s national animal the Oryx as well as birds belonging to this region; A fascinating outing for all. Timings: Daily except Saturdays 3 P.M- 9 P.M Admission: 5 QR (Adults) 2 QR (Children) Address: op...