April 22- Emirates Airline resumed its flights to some of the major airports in UK including Heathrow, Gatwick, Birmingham, Manchester, Newcastle and Glasgow. The resumption of flights will start after a week of suspensions due to the Iceland volcanic eruption and resulting ash cloud lingering over Europe. "We are hoping to make some good progress today in helping the many passengers who have been held up by the ongoing disruption," said Richard Vaughan, Emirates' Divisional Senior Vice President, Commercial Operations Worldwide.
Earlier, Emirates Airline's president, Tim Clark, said that its revenue loss was about $10 million a day, in addition to the $1 million a day to accommodate passengers.

The Thien Hau Pagoda is a must-visit in Cholon. It is dedicated to the Chinese goddess Thien Hau, who is known as the protector of seafarers. Regular festivals are held here and the place is always packed with worshippers while the smell of incense hangs in the air. Location: Thien Hau Pagoda                Nguyen Trai district, Quan Am on Lao Tu St...

Red Square is one of the most important sites in Moscow and swarming with tourists every holiday season. Communist parades were held here and parades continue to pass through this square. This structure is not to be missed especially since Lenin's Mausoleum is located right here. This houses the embalmed body of Lenin. Lenin was an extremely significant player in Russia's history. He led th... 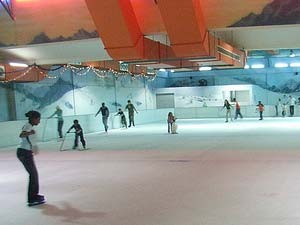 Within 5 kms of the City Center is this architectural masterpiece. Considered the largest rink in East Africa, the Ice Rink is on the 2nd floor of the Panari Sky Center. It has 15,000 square feet of ice and can accommodate 200 skaters. The ambience of the Alpines have been recreated. ...