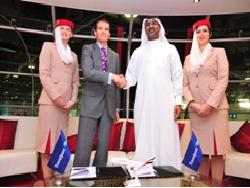 Dubai, United Arab Emirates: 7 May, 2010:  Emirates airline and Travelport, one of the world’s leading global distribution system (GDS) providers, today signed a major global content agreement that will provide all Galileo, Apollo and Worldspan-connected travel agents with access to the airline’s full inventory of flights and fares.

The five-year deal, which takes effect immediately, ensures rate parity for Travelport’s extensive worldwide network of travel agency users, providing them with access to the most up-to-date routes and fares from Emirates, including the airline’s web fares.

“We are delighted to have signed an agreement that will guarantee full content to all Galileo, Apollo and Worldspan users,” said Nabil Sultan, Emirates’ Divisional Senior Vice-President, Revenue Optimisation and Distribution. “With a significant worldwide network and long-standing GDS expertise, Travelport is an important distribution partner and this deal will further strengthen our position with its travel agent users.”

“We have worked hard with Emirates to reach a cost-effective agreement that will truly benefit our travel agency customers worldwide,” said Bryan Conway, Travelport GDS’ President and Managing Director, Middle East and Africa (MEA).  “This deal continues on our strategy of securing full content programmes across the globe and demonstrates the continued value of our distribution channel.”

It was built in 1104 for the kings of the Koryo Dynasty as a summer palace and became one of the main palaces of the Joseon Dynasty. The palace is connected to the Jongmyo Shrine which was used for sacrificial rites in the Joseon Dynasty.  The palace faces east to west, instead of the usual north to south. Admission: Adults (19 to 64 years old): 1,000 won; Groups: 800; Children (7 to ...

Mahalaxmi Dhobi Ghat is Mumbai’s 136 years old laundry. It is an amazing sight to see the city’s dirty laundry being washed in row upon row of open-air troughs.  The dhobis working at the ghats wash every item by hand. It’s a fascinating sight and a popular photo-opportunity.  Anyone can look from above, but visitors are discouraged from entering the washing floor. Address: Dr. E Mo...

This place is located at one end of the Nice harbor and is a good place to go to relax. There is a sea wall here along which you can walk down to the Nice lighthouse.  The phare et digue is a wonderfully peaceful place with an atmosphere where you can truly unwind.     Port de Nice ...

this free museum is located just off Imam Khomeini Street and is open 8am-4pm on weekdays. It is also known as the telephone, post and telegraph ministry museum and displays a large collection of stamps and memorabilia.  ...