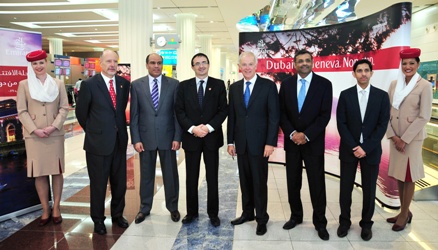 In true international style, passengers were booked onto today's inaugural flight out of Dubai from places such as Australia, Ethiopia, Tanzania, India, Bangladesh, Kuwait, Iran and Mauritius.

After a display by a traditional Swiss dance couple in Emirates' exclusive Terminal 3, EK 089 left Dubai, near on full. Swiss First Officer, Alexander Trueb, was on the flight deck with UAE National Captain, Hassan Al-Hammadi.

"This launch, in particular, has a strong international feel about it - linking Dubai, as a global aviation hub and centre for business and tourism with Geneva, a home to so many international organisations and an important financial and banking centre," said Tim Clark, President, Emirates Airline. "On the back of our robust financial results, the airline continues to drive forward - connecting key cities around the world," Mr Clark added.

“We are very pleased to welcome Emirates in Geneva. The airline is a worldwide reference in terms of reputation and quality of service”, acknowledged Francois Longchamp, State Councillor of the Canton of Geneva and President of the Board of Geneva Airport.

Tonight, around 400 guests will gather at Geneva's Espace Hippomene for a high profile gala dinner to celebrate the launch.

The Dubai-Geneva service will be operated by a combination of Boeing 777-200LR and Boeing 777-300ERs. The aircraft will be arranged in a three-class configuration, offering First Class Private Suites, lie-flat seats in Business Class, and a spacious cabin in Economy Class.

Passengers in all classes are able to sit back and enjoy the popular ice entertainment system, along with gourmet-chef prepared meals, served by multi-national cabin crew. This is Emirates' second gateway into Switzerland after Zurich, which started in 1992, and is now double daily.

Each 777 operating the Geneva route will be able to carry 15-20 tonnes of cargo. Much of the capacity out of Geneva is expected to be used by the luxury sector, one of the top employers in the Geneva region and responsible for 60% of its exports. The cargo manifest for first Geneva-Dubai flight includes fashion items, perfumes, pharmaceuticals, electronics and relief goods.

The Giant Sky Wheel is one acclaimed as one of the largest ferry providing service in the Southern Hemisphere. Situated adjacent to the Federation Square the ferry service becomes operational from the Birrauang Marr at the edge of the Yarra River. The view is extremely panoramic especially during the night time when the illuminating lights provide a completely different look to the city of Melbour...

When Bangkok became the capital in 1782, King Rama I ordered the construction of this shrine. Inside are the four gods revered by the Thais including Phra Seua Muang, Phra Song Muang, Phra Lak Muang and Phra Siam Devathiraj. All four are thought to be the protectors and guardians of the city of Bangkok.   Address: Th Rathchadamnoen Nai & Th Lak Muang Tel: 02222-9876  ... 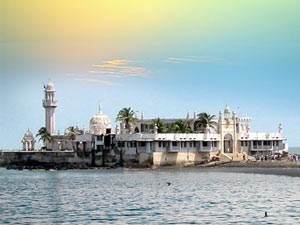 Haji Ali Dargah is a mosque  and shrine on an island off the coast in Worli. It was built in memory of  Haji Ali, a rich Muslim merchant who gave up all worldly pleasures before embarking on a pilgrimage. Popular not just with Mumbaikars but also people from all over the country and abroad, this mosque (dargah) is built in the Indo-Islamic style of architecture and looks stunning amid...

The Red sea Corniche offers a spectacular view of the sea, lined with the shopping street you can get good bargain of gold at the Gold souk, in the Tahliya. You can also witness the breathtaking King Fahd Fountain which throws colored water up in the air. It is recommended to see this at night as the view is spectacular at that time.  ...