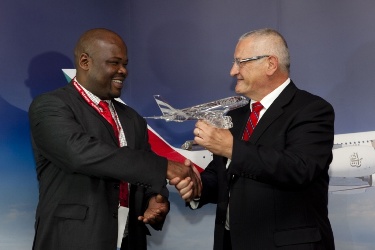 Johannesburg welcomed its first scheduled Emirates A380 service yesterday, as flight EK761 from Dubai arrived at O R Tambo International Airport. Johannesburg, the economic powerhouse of South Africa, is the first destination for the double-decker in Africa and the sixteenth destination on the Emirates A380 network.

"The demand for Emirates' services in and out of Johannesburg has always been high, with passenger growth of more than 27 percent over the last year. It is fitting that our A380 is now serving South Africa and we would like to thank the Department of Transport and OR Tambo International Airport for their efforts in enabling us to bring this exceptional aircraft to Johannesburg," said Jean Luc Grillet, Emirates' Senior Vice President, Commercial Operations, Africa.

"The UAE and South Africa's strong and successful relationship has been built on the twin pillars of trade and tourism. In introducing our flagship aircraft and the extra capacity it offers, Emirates will help to further boost this important partnership," added Mr Grillet.

Over the last year, Emirates has carried more than 900,000 passengers across its three South African gateways - Cape Town, Durban and Johannesburg. In the first eight months of 2011, the airline also carried more than 37,500 tonnes of high value cargo on its South African routes, with exports up 26 percent from the same period in 2010.

"Our world-class infrastructure investment in O R Tambo International Airport is integral to the continued economic growth of Johannesburg, the primary passenger and freight gateway into Africa," said Vuwani Ndwamato, Director Air Transport at the Department of Transport .

"The introduction of the Emirates A380 exemplifies our efforts to power a world-class city and stimulate investment to strengthen South Africa's position as a major player in the global economy," Mr Ndwamato added.

On the flight deck of today's A380 flight to Johannesburg were Captain Christos Panagiotopoulos and First Officer Kenneth Hubbard, both from South Africa.

Emirates employs a total of 176 pilots and 389 Cabin Crew from South Africa.

Guests invited to a special reception at O R Tambo International Airport were given the chance to explore the superjumbo - with its 399 seats in Economy Class, 76 lie-flat beds in Business Class and 14 First Class Private Suites. No matter what class they travel in, passengers on board the Emirates A380 will enjoy the highest levels of comfort in the air, including the airline's multi award-winning ice entertainment system, which features 1,200 channels of movies, television, music and games. Customers in First Class and Business Class can also enjoy an exclusive Onboard Lounge at 40,000 feet, while First Class passengers can freshen up in one of two Onboard Shower Spas.

Emirates is the largest operator of the environmentally friendly double-decker aircraft, flying the A380 to London Heathrow (double-daily), Manchester, Paris Charles de Gaulle, Toronto, Seoul, Bangkok, Beijing, Shanghai, Jeddah, New York, Hong Kong, Sydney and Auckland. From 1st December 2011, the A380 will also begin serving Kuala Lumpur and Rome, followed by Munich from 1st January 2012. So far in 2011, Emirates has launched passenger flights to Basra, Geneva and Copenhagen. St Petersburg will be launched on 1st November, followed by Baghdad on 13th November; and Dublin, Rio and Buenos Aires in January 2012. Emirates' 20th and 21st destinations within Africa - Lusaka and Harare - will launch on 1st February 2012.

The Race Course and Equestrian & Horse Racing Club was established in 1977 and aims to revive the Arab custom of horse riding and grooming as well as training the new generation in the time-old tradition of riding horses. The course can house up to 40,000 spectators, and even children are welcome. Placing bets on the horses and the outcome of matches is strictly forbidden. Timings: Friday ...

The Egyptian Museum holds one of the top attractions in Cairo, the Tutankhamun Galleries. The Tutankhamun Galleries is where the treasures of the boy-pharaoh Tutankhamun are held. King Tut (as he is referred to in popular culture) had no great historical significance prior to 1922, when the British Egyptologist Howard Carter found his tomb almost entirely intact in the Valley of the Kings (on the...

This historical palace built in the 17th century is in the Baroque style. Here you can view some wonderfully ornate decoration pieces. The floor which is most elaborately decorated still holds the paneling and ornaments from the 18th century. Also built during the same century was a pharmacy which  still holds many of the original Delft items. 15 rue Droite Timings: Wednesday to ...