April 22- Lawyers on Wednesday said that several European airlines are likely to sue government agencies for suspending flights for about a week because of safety concerns. This, they said, is a possibility if their own countries do not compensate the carriers for the losses incurred. According to the International Air Traffic Authority (IATA), airlines have lost about $1.7 billion owing to flight suspension. As a result of this, airlines are likely to sue government agencies such as Britain's National Air Traffic Services (NATS), largely responsible for grounding flights.
In this regard, Jeff Zindani, managing partner at UK solicitors Forum Law said that he expected to see "a raft of class actions brought by airlines and companies" against government agencies if they were not compensated. The damages could be well above one billion pounds, he added. Others, however, felt that it would be difficult to sue government agencies. "You would have to establish that there was a duty of care owed by bodies like NATS but they would say they are just providing the best available information in good faith so it would be difficult," said Dan Hyde, a solicitor at London's Cubism Law.
Meanwhile, European airspace was re-opened on Wednesday after a week-long suspension of flights owing to the lingering ash cloud from Iceland’s volcanic eruption. 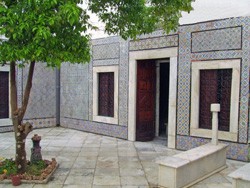 The Mausoleum of Princess Aziza of the Ottoman Empire is a historically significant site in a very intrinsic way. History has it that the princess had a very generous hand for the poor and destitute and even guided the construction of a hospital. Therefore, this mausoleum is visited often by locals and tourists for its beautifully decorated walls and ceramic work. Within the mausoleum is the grave...