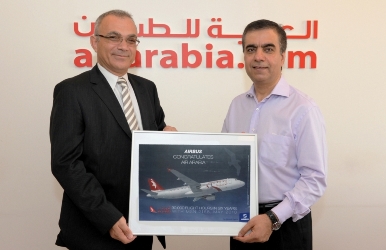 Sharjah, September 20, 2010: Air Arabia, the first and largest low-cost carrier (LCC) in the Middle East and North Africa, set a new World record when one of its A320 aircraft flew 30,000 flight hours in six years. Air Arabia received special recognition from Airbus, and was awarded for its operational efficiency and the new world breaking record.

“This award is an acknowledgement of Air Arabia’s operational excellence and service reliability,” said Adel Ali, Board Member and Group Chief Executive Officer of Air Arabia. “It is especially encouraging to receive this recognition by a prestigious aircraft manufacturer such as Airbus. Over the years, Air Arabia remains focussed on offering the best value to our customers, which means optimum utilisation of our resources, including the state-of the art Airbus A320 aircraft, which represents the heart of our fleet”

“Airbus is proud of the success of AIR ARABIA with the world’s leading Airbus A320. Choosing the most efficient and cost effective A320 with a superior cabin for passenger comfort shows a great deal of vision of Air Arabia, says Fouad Attar, SVP Commercial at Airbus Middle East.

In January 2007, Air Arabia received a special certificate from Airbus for achieving the highest average level of A320 fleet utilisation during 2005-2006. In June 2007, Airbus named Air Arabia winner of the award for Operational Excellence (2005-2007) for recording the world’s highest indicators for operational reliability.

Combining financial strength and superior operational reliability, Air Arabia aims to expand the size of its existing fleet with the delivery of its 44 aircraft on order, starting end of this year. 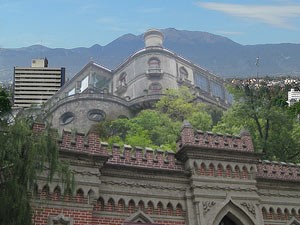 A building that has seen generations come and go, has endured the ramifications with dignity, and stands strong to this day to tell the tale. It has always been a residence for the rulers of Mexico - Spanish Viceroys and Mexican Emperors. It was also, at different times during its history, a military academy, the presidential palace, an observatory, and, finally, has come to be used as a museum...

This region presently is almost totally untouched and a wonderful place to visit for its peace and quiet. Major development is set to take place here over the next decade to cover all five southern atolls that are currently off-limits to non-permit-holders. Safari boats are regularly exploring dive sites as far south as the Huvadhoo Kandoo (famously known as One-and-a-Half-Degree channel), and sur...

Çiragan Palace's name is derived from the Persian word for torch (cherag).  It is so named because of the torches used to light the lavish parties thrown by the Ottomans in the late nineteenth century.  The palace was built by Sultan Abdulaziz between 1863 and 1867, though the decorating was not completed until 1872.  It marked the end of the contemporary Ottoman tradition of each s...