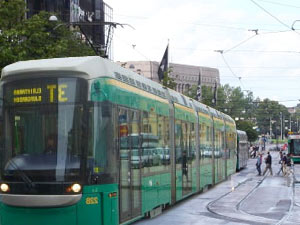 Tram is perhaps the easiest way to revel around Helsinki City Center. Tourists get a complete picture of the modern city as the tram whizzes past a number of locations that are on the route chart. The city has a well established tram network that covers major destinations and travelers can easily board from the various stops located around the city. Route 3B and 3T are known for their figure-8 circuit around Helsinki.
Tram tickets have to be bought at the stops.
Travelling by tram can only be enjoyed during the day as the network closes before midnight. The tram system is run by Helsinki’s public transport system called ‘Helsingin Kaupungin Liikennelaitos’.

SpåraKOFF Bar Tram is a special tram service for tourists who can visit a variety of monuments for a ticket of 7 Euros. It runs during the summer only.